VET is up by more than 5% after the UFC deal 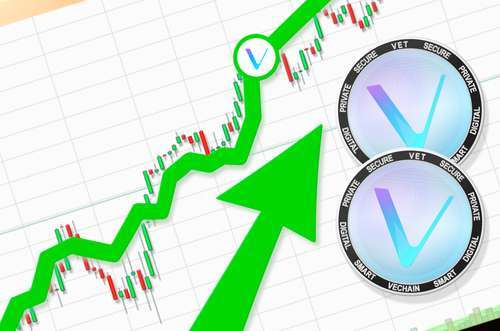 The cryptocurrency market has been underperforming over the past few hours, but VET is currently in a bullish move.

The cryptocurrency market is down by less than 1% over the past 24 hours as Bitcoin, and the other major coins are trading in the red zone. At the moment, the total crypto market cap remains below the $1.3 trillion mark.

Bitcoin, the industry leader, continues to maintain its price at $30k despite losing 0.7% of its value over the past few hours.

However, VET, the native token of the VeChain ecosystem, is one of the best performers amongst the top 40 cryptocurrencies by market cap. VET is currently up by more than 5% today, and it is only outperformed by a few cryptocurrencies, including Chainlink and Tezos.

VET’s ongoing positive performance can be attributed to VeChain’s partnership with UFC.

The VeChain Foundation announced on Thursday that it had entered a global marketing partnership deal with UFC, the world’s premier mixed martial arts organisation.

As a result, VeChain is now UFC’s first-ever Official Layer 1 Blockchain Partner, providing the blockchain Foundation with an unprecedented level of integration into key UFC assets.

The VET/USD 4-hour chart is bullish as VeChain has outperformed most of the leading cryptocurrencies over the last 24 hours.

The MACD line remains below the neutral zone, but the recent positive performance has seen it move higher. The 14-day relative strength index of 56 shows that VET is no longer in the oversold region.

At press time, VET is trading at $0.03165 per coin. If the positive momentum is maintained, VET could surge past the first major resistance level at $0.03358 before the end of the day.

However, VET could need the support of the broader crypto market to enable it to move past the $0.040 resistance point for the first time this month.