This new week has started somewhat positive for crypto. Most coins have continued the weekend rally, with Graph posting some decent gains over the past 3 days. The coin has however seen some slight pullback today but overall, the uptrend momentum is still strong. With increased trading volume, we could see GRT gain further before the week is out. Here are some key points: 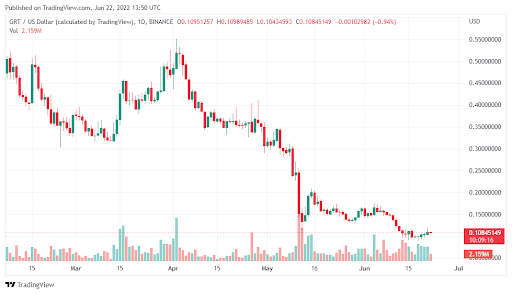 GRT, like many other coins in the market, has seen a short period of steady recovery after prices crashed a week or so ago. The token has in fact reported three straight days of gains. As it builds momentum, GRT has also managed to overcome a crucial long-term resistance zone of $0.093.

This has pushed the token slightly above $0.1, where it was consolidating before pulling back slightly over the last 24 hours. While the market still poses a significant downside risk, we believe that GRT still has enough momentum to target the $0.15 resistance.

The coin will likely resume its bull run over the coming few days, especially now that trade volume appears to be growing. There is however very limited upside above $0.15. This remains the coin’s 20-day EMA and as such, it will take a lot of strength in the near term to overcome the price.

Should you trade GRT now?

The market is still volatile, and altcoins like GRT are not yet out of the woods. So, while a short-term trade could be on the cards for GRT, holding it for longer could expose investors to future downturns in the market. So, you can still buy the coin but make sure to exit at $0.15.